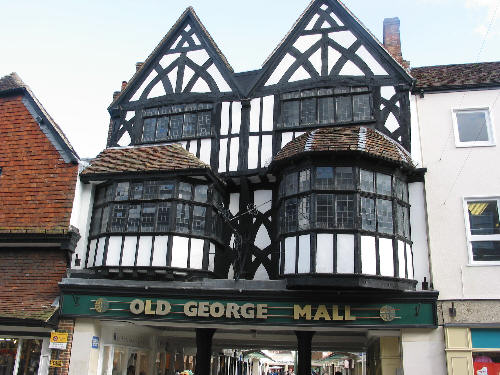 The building had been vacant for over 10 years and during that time the dampness encouraged death watch beetle to multipy and spread.

Hurst Peirce + Malcom LLP were instructed to organise repairs to areas weakened by the death watch beetle, fungal attack and other causes so that the building could be returned to a state suitable for tenants

The process began by consulting English Heritage as part of the Listed Building Consent process. In this were were greately aided by Dr Brian Ridout who advised on the probable extent of the death watch beetle infestation and carried out sampling tests to confirm his conclusions that the area of infestation were primarily confined to the damp external timbers in the elevation shown on the photograph.

As a result, treatment for deathwatch beetle has been concentrated in a few specific areas while the remaining areas are expected to die out over the next few years as the building becomes warmer and drier.

The condition of the timber, expecially at the joints was investigated using a Silbert drill under the direction of English Heritage. This determines the resistance to pushing a seel wire into the timber and gives a good indication of weak areas in the timber. As a result some weak timbers have been repaired and new sections spliced in.

The contractor for the work was Maidment & Carter who specialise in work to timber framed and old buildings.